Let me introduce the “HTML5 Soda Can” demo I made for ThinkMobile2011 a while ago. 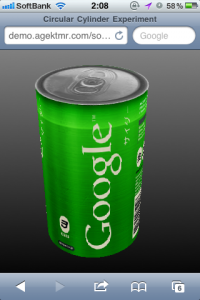 The original request was to come up with some ideas of HTML5 ads for audience at the event. It isn’t that hard just to create ads using HTML5, but since the purpose was to show off to the audience, I needed to inject “wow” feeling as well as to put clear sign that it’s made of HTML5.

Though there’s still a lot of things which native apps can do while web apps cannot do, it’s an interesting challenge to make HTML5 apps work like native apps. On the contrary, it’s advantage of web apps that you can see the app without installing.

So, here’s the demo I have come up with: “Wow” enough HTML5-ish, instantly experience-able and easily imagine-able of actual advertisement.

Soda Can: Please access using iPhone or iPad (you can view on Chrome but don’t break your MacBookPro!)

When the background turns red enough, try touching tab of the can. (sorry if browser crashes…)

How was that? Doesn’t this look interesting when you see it after clicking banner ad of some kind of soda drinks?

Could you guess how I did it? I assume you wondered how I did:

The side of can is made of many (180) long and narrow divs with each background images slightly shifted. Adding top and bottom of the can completes the shape. GPU rendering doesn’t make you feel like it’s actually moving more than 180 DOM elements when Device Orientation API detects device tilt and style changes.

I don’t bother writing any more details since it’s much easier reading the source code. This is roughly the tricks.

Asking users to install native app which is actually ad via ad sounds ridiculous but what if that app is made of HTML5? It may directly lead to conversion.